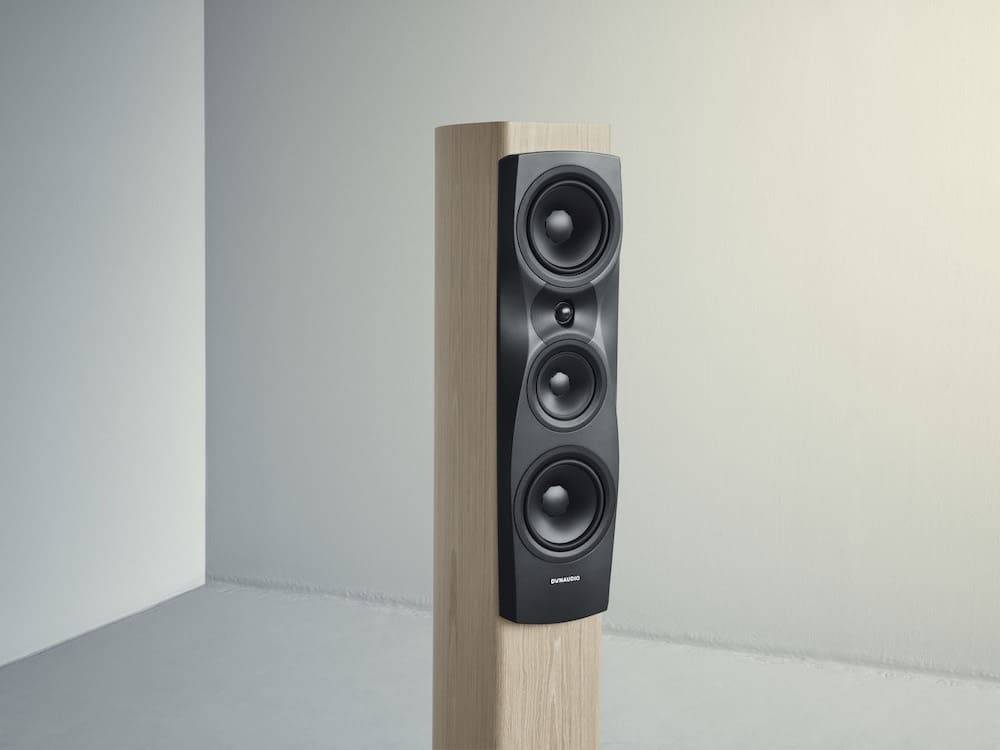 SINGAPORE, @mcgallen #microwireinfo, December 3, 2019 – The all-new Dynaudio Confidence range introduces a raft of new technologies – all of which were conceived, engineered and perfected in Dynaudio Labs, the company’s R&D facility at its HQ in Skanderborg, Denmark.

The new line-up of Confidence 30, 50 and 60 floorstanders promises game-changing performance and to put it simply, Dynaudio’s best speaker range yet:

Confidence 30 (S$30,888) is a medium-sized three-way floorstander with DDC (Dynaudio Directivity Control) technology on board. It uses a brace of 18cm woofers with neodymium magnets, one 15cm midrange (also with a neodymium magnet) and one Esotar3 tweeter with the DDC Lens.

Confidence 50 (S$41,888) is a large 3-way floorstander with DDC tech. It has a pair of 18cm woofers with neodymium magnets, two 15cm neodymium midrange drivers and one Esotar3 tweeter with the DDC Lens.

The new passive
The all-new Confidence drives passive speaker technology performance to new heights. Dynaudio has been designing and building loudspeakers for more than 40 years, and its engineers have used all their experience to take technology familiar to all and further refine it – starting at the top with the new Esotar3 tweeter. The new Confidence also marks the first outing for Dynaudio’s next-gen DDC Lens, the headline feature in the now legendary Dynaudio Directivity Control sound-beaming technology platform. The speakers’ woofers are the all-new NeoTec design (made from the company’s proprietary MSP material), while the composite Compex baffle and midrange driver with ingenious Horizon surround also make their debuts.

New Esotar3 tweeter
Representing the pinnacle of Dynaudio soft-dome tweeter design, the 28mm Esotar3 incorporates, and improves on, the cutting-edge airflow-optimisation system employed in the award-winning Esotar Forty anniversary tweeter. Up against its Esotar2 forebear, as seen in the latest Contour and previous Confidence series, this version uses a larger rear chamber to reduce resonance, further optimises damping, and uses a super-strong neodymium magnet to present greater sensitivity and control.

Inside the Esotar3 sits the Hexis – a small inner dome that replaces the Esotar2’s felt ring for even greater control over resonances, while also smoothing out the frequency response.

DDC (Dynaudio Directivity Control) Lens
The previous generation of floor-standing Confidence speakers had dual tweeters and an incredibly complex crossover to help form a sound beam that would reduce reflections from floors and ceilings. They all worked together – along with other components in the speaker – as part of a system called DDC (Dynaudio Directivity Control).

Dynaudio Labs has created a next-gen DDC platform for the new Confidence. The latest speakers need only one tweeter, and a simpler crossover, thanks to the DDC Lens. This is an intricate, precision-formed aluminium waveguide that refines the vertical audio image while maintaining wider horizontal dispersion than before.

The DDC Lens works in conjunction with the Esotar3 and the speakers’ midrange drivers and woofers to reduce unwanted reflections and to focus the stereo image on the listening position.

NeoTec woofers
The Confidence’s brand-new woofers use neodymium magnets for greater power, more finesse and improved dynamic range. The drivers also have new voice-coils that use up to three layers of glass-fibre in their formers for optimum stiffness, along with developments in airflow and venting (particularly in the bottom of the yoke).

Clever use of aluminium or copper in the voice-coils across different models ensures the moving mass is appropriate for that particular driver. And, of course, they all use Dynaudio’s celebrated MSP (Magnesium Silicate Polymer) material – just as all the company’s woofers have done for decades.

Compex baffle
The Confidence’s signature baffle has been revamped. It’s now crafted from an advanced composite, Compex, that’s not only very light, but extremely strong – not to mention rigid and well-damped to absorb unwanted resonances. Lift one up and tap it, and you’ll hear that it’s acoustically very dead. Exactly as it should be.

The drivers are sandwiched around the baffle with gaskets. There’s an alloy mounting plate on the back containing the screws – which means the woofers are very tightly coupled, and the tweeter and midrange drivers are decoupled as much as possible to avoid vibration.

The Compex baffle has been developed, simulated and constructed to work as part of the DDC Lens – so they both, along with the drivers and crossover, all mesh perfectly into the DDC platform.

Why composite? The MDF of the previous Confidence’s baffle wouldn’t be able to handle the precise angles, curves and edges that the updated DDC technology demands. Compex can. Plus, it can be designed with specific mechano-acoustical properties that won’t change over time.

New midrange driver with Horizon surround
The Confidence’s brand-new MSP midrange driver is a big departure from previous Dynaudio designs. It has a radical surround design – the Horizon – that follows the cone’s shape right to the edge of the driver. This reduces the surround’s first resonant mode to effectively increase the whole playing surface area and improve performance. It also sits flush with the baffle to reduce diffractions from the diaphragm and the nearby tweeter.

Behind the scenes, the basket has been given a new lightweight organic design – one that’s come from extensive topology-optimisation simulations. It increases airflow, maintains its stability and rigidity and reduces weight simultaneously without sacrificing performance.

The presence and the power
Dynaudio’s design team has created four striking new cabinets, in which to contain its raft of new speaker technology. Drawing from the Danish maker’s new Contour range, Confidence 2019 owners get a bullet-shaped cabinet, complete with a seamlessly rounded shape all the way around the back.

These curved cabinets also integrate WBT’s NextGen terminals into the foot of the plinth, and the bass reflex port is a hidden, down-firing design. Derived from the celebrated Consequence Ultimate Edition, this downward firing approach enables a wider port – this decreases port noise – as well as higher output and lower tuning frequency. The result? Clean, powerful and articulate bass response, minus audible artefacts, at even high volumes.

As promised, the Confidence’s innovative design runs from top to bottom: the innovative dual-surface feet keep everything on the level regardless of the floor material – and they’re adjustable without tools, and without having to turn the speaker upside-down.

A masterclass in performance, the new Dynaudio Confidence range is exclusively available in Singapore at AVOne Showroom (1 Coleman Street, #01-01, The Adelphi).

About Dynaudio
Dynaudio was founded in 1977 in Skanderborg, Denmark. Today, Dynaudio is recognised as one of the leading manufacturers of high-quality audio systems and one of the world’s most distinguished high-end audio companies. Dynaudio develops and manufactures dedicated audio systems for the professional markets as well as car audio and home audio consumer loudspeaker products at the company’s state-of-the-art facility in Denmark. Dynaudio is particularly recognised for its advanced driver technology designed, engineered, and continuously developed in-house, and its furniture-grade, handcrafted Danish cabinetry.

About AVOne
AVOne was designed to spread the passion of sound-making and the enjoyment derived from consuming high-quality media on high fidelity systems. Established in 1998, this family business has since grown from strength to strength. AVOne is now a THX-Certified professional retailer and distributing multiple award-winning brands of premium lifestyle audio, home cinema, high-definition digital and 3D projection, karaoke-on-demand and audiophile-centric stereo systems.