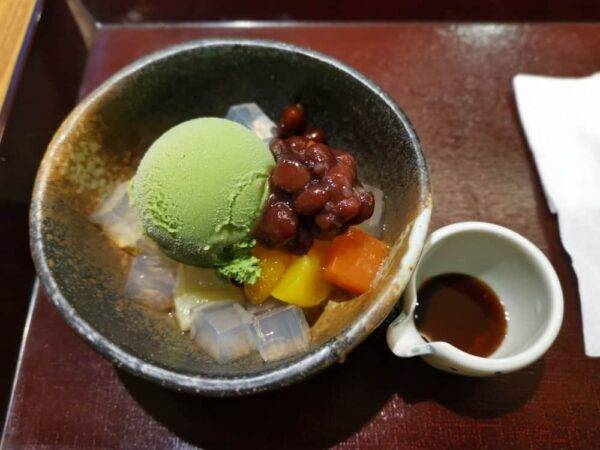 If you have watched the Netflix Japanese TV series Kantaro the Sweet-toothed Salaryman, you would know what the allure of Anmitsu (あんみつ, 餡蜜) is. And if not, read on.

As someone who loves Japanese cuisine, dessert ranks highly for me too. Even as a gym-goer focused on weight training and martial arts (Karate and Muay Thai), the sweet stuff attracts me, especially those desserts with a clean sweet taste without the fatty stuff. So cheesecakes and other Western confectionery generally do not attract me. But Japanese desserts have very pristine tastes and are generally not oily.

A salesman and his dessert journey

I am a fan of Japanese drama, for the simplicity of sets and production, coupled with the sophistication of the storylines, acting, and music. As a filmmaker myself, I marvel at the subtle art of storytelling the Japanese are great at – all the subtlety, and all the emotional and intellectual depth.

In the Kantaro the Sweet-toothed Salaryman story, the engineer Kantaro decided to give up a technical career because he craved for dessert and the only job that would allow him to sneak out to savor dessert, would be a sales job. His mum is a dcotor and disciplined Kantaro a great deal, forbidding him to eat any sugar at all. But the more you are told not to do something, the more you would be tempted to do it. Kantaro joined a publisher as a salesman, and began his escapades to dessert-land. His introduction of the Anmitsu would be legendary.

Passed down from the Meiji era

Anmitsu has the clean classical taste, because it is not new. It is a traditional dessert passed down from the Meiji era (明治時代), from 1868 to 1912 prior to the world wars. The Meiji era marked the end of the Shogunate (such as Tokugawa), where the warlords (shoguns) ceded the power peacefully to the emperor, and a new Japan was born. The daimyo and samurai classes were abolished, and a peerage system was born (adopted from the Western world of peerage of princes, marquis, counts, viscounts and barons). Meiji (明治), meant “illumined or enlightened government”.

With peace came culture. And cuisine flourished. One such product was the Anmitsu which continues to be enjoyed today.

There are many variants of the anmitsu, typically they have Azuki red bean paste (red bean, 餡子), agar agar jelly cubes, and mitsu (a small cup or pot of dark brown syrup). Red bean is a common food ingredient in Japan, made most famous by Dorayaki (commonly a fish-shaped pancake filled with Azuki red bean paste).

Some anmitsu contain boiled peas, which look like larger versions of red bean, but do not have the same sweetness. Often, a serving of slices of pineapple, sweet orange, peach, and cherries. Some anmitsu top off with ice cream, such as the matcha ice cream (green tea), and would be known as “cream anmitsu” in Japan.

The version I ate is the cream anmitsu without the Azuki red bean paste, which would be called Mitsumame (without paste). I prefer it because it is less dense, and still with all the great taste of a small bowl of delight.

You can catch this version of the anmitsu at Yayoi.

There are many smartwatches today, from many name brands from different operating system camps. However, many of these smartwatches drain...

Editor's brief: If you are a music enthusiast who believes in creation more than just listening, then you know there...

If you are someone who wants to make short films and vlogs with your smartphone, perhaps it is time to...

Editor's brief: Yes, we are all familiar with the acoustic guitar we played as college kids (or younger). We would...